Not always, such as in the case of bodies of water. Streaks and swirls of green brushed over the surface of lakes like paint can be indicative of harmful algal blooms (HAB), or as the National Oceanic and Atmospheric Administration (NOAA) likes to call them, “tiny organisms with a toxic punch.”

Over the past two decades, the severity of HABs — specifically cyanobacterial blooms — in the western basin of Lake Erie has increased. Through their production of toxins, these blooms can induce illnesses for humans and animals and result in serious ecological, public health and economic consequences.

For water managers and policymakers to better mitigate HABs, accurate knowledge of the mechanisms controlling the timing, duration and toxicity of HABs is needed. At The Ohio State University, two researchers hope to contribute to this knowledge through their project funded by the Ohio Water Resources Center.

Lyndsie Collis, a doctoral student in the Department of Evolution, Ecology, and Organismal Biology, is working alongside Dr. Jim Hood, an aquatic ecosystem ecologist and Assistant Professor in the same department and also the Translational Data Analytics Institute, to research one potentially important component in supporting HAB production in western Lake Erie: nutrient recycling by zooplankton. With their study, Collis and Hood hope to gather insight into what governs the characteristics of HABs and thus improve future HAB forecasts. 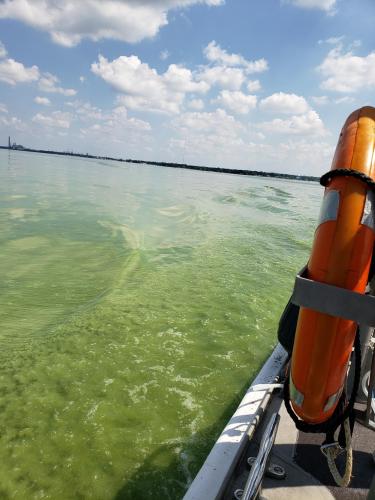 “Our interest in this stemmed from something I think that has troubled me ever since I got to Ohio,” Hood said.

The troubling issue for Hood is the question of where phosphorus goes before fueling harmful algal blooms.

Generally, spring phosphorus-loading — the runoff of phosphorus into bodies of water from sources like fertilizer in fields during the rainy season — from the Maumee River strongly predicts the summer algal bloom extent in Lake Erie; however, it is not clear how the phosphorus is stored and cycled prior to and during bloom formation. Hood said the approximately two-month residence time of the western basin should push the phosphorus out with the water, yet somehow it remains to produce blooms later in the summer.

“The concentration of phosphorus that you see in the water before the bloom happens, it’s near zero, so there’s really not much phosphorus hanging out in the water,” Collis said. “Therefore, it must be going into something — whether it’s the sediment, the mussels, the fish, or the zooplankton — and then is re-released and made available for the phytoplankton and the harmful algae to take it up again.”

Collis and Hood are asking whether zooplankton are an important component in maintaining phosphorus in Lake Erie between spring loading and summer cyanobacterial blooms.

As stated in their research proposal, they plan to test components of a hypothesis arguing that nutrient excretion by zooplankton influences the concentration and ratio of dissolved nitrogen and phosphorus and, therefore, mediates the extent and toxicity of HABs in western Lake Erie.

In the past, Collis said nutrient cycling by zooplankton has been relatively unexamined, partially due to the labor-intensive measurements.

The Ohio State University researchers, however, are prepared to take on the task of studying zooplankton as they understand how crucial the results could be in helping manage HABs.

“Let’s assume that it’s the zooplankton that are controlling harmful algal blooms. If there’s some shift in zooplankton species, you might be managing for phosphorus and be doing a really great job of it, but then you’re still potentially going to see a really toxic bloom because you might have a zooplankton species that’s releasing more nitrogen into the system,” Collis said. “That’s the consequence of not understanding really what’s going on.”

Collis said the limited predictive ability in knowing when or for how long water may be toxic affects the people who are concerned with water intake, municipal water supplies, fisheries, and recreation like beaches. 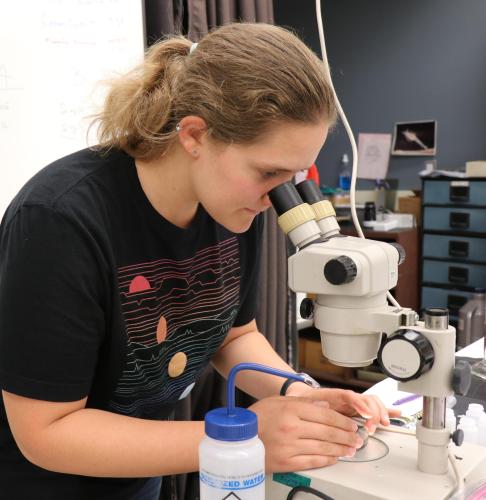 Originally, Collis and Hood had planned to begin the field season for their research in 2020, but the COVID-19 pandemic delayed their project. They made the most of the waiting period, taking extra time to think through their research methods, order supplies, and even develop a collaboration with NOAA — their Great Lakes Research Laboratory in particular.

The researchers’ initial proposal only planned to explore the release of phosphorus from zooplankton nutrient cycling. Now, Hood said the new partnership with NOAA has expanded their research to include looking at the movement and quantity of algae and phosphorus in the zooplankton.

“We don’t know a lot about which algal species zooplankton eat in Lake Erie,” Hood said. “I think this will start to sort of crack open some of those questions as well.”

In April 2021, Collis finally made her way to Maumee Bay to begin her field season, arriving back in Columbus at 10 p.m. with a car full of Lake Erie water and zooplankton. But the long day of collecting samples was only the start of three-day-long experiments, needing to be repeated and repeated through the following weeks and months.

Collis and Hood plan to finish the field season in October and expect to be processing samples through the spring or summer of next year. This winter, however, they hope to start analyzing preliminary data.

“There’s a lot of work to be done, but I’m excited,” Collis said. “I think we’re going to get some interesting results, and we’re going to be able to start sharing them next year.”